Have you ever wondered how the speed of our human legs running compares to the flapping wings of an animal in the air? Are terrestrial humans faster than aerial animals?

Humans walk at an average of 4mph and can run at an average of 27 mph. Just to put things in perspective, a Peregrine Falcon can reach a speed of 240 mph! It is the fastest animal on the planet during its hunting dive. What about other birds? A Rock Dove (pigeon) reaches speed of 92 mph which is still much faster than the farm manager at Chrisholm Historic Farmstead, any MetroParks employee or any human!.

What about any flying mammals? The Big Brown Bats can fly up to 40 mph and they are reported to be one of the fastest bats.

Humans should be able to beat an insect right? Ever chased a horsefly? It can reach speeds of up to 90 mph. The beautiful common green darner dragonflies at VOA MetroPark lakes can travel at 35 mph.

An insect that we can beat… is a common housefly. They can reach speeds of up to 10 mph. So if you run really fast and sneak up on the fly – maybe it won’t see you with it’s simple and compound eyes!

A tiny insect called a midge has the fastest wingbeat at 62,760 beats per minute. Put your thumbs underneath your underarm. Hold your elbows up high and flap as many times as you can in one minute. How many beats did you do in 60 seconds? Anywhere close to a midge’s wingbeats? 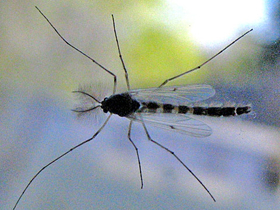