Corn husk dolls were a very popular toy made from things found around the home or farm in the 19th century.   Since most families raised their own corn, corn husks were easy to come by along with fiber from the sheep or goats to use as hair. Still today, this is a fun craft that can be used as holiday gifts and decorations!   If corn husks are something that you don't happen to have around the house, they can be purchased in the produce or craft areas of many stores. 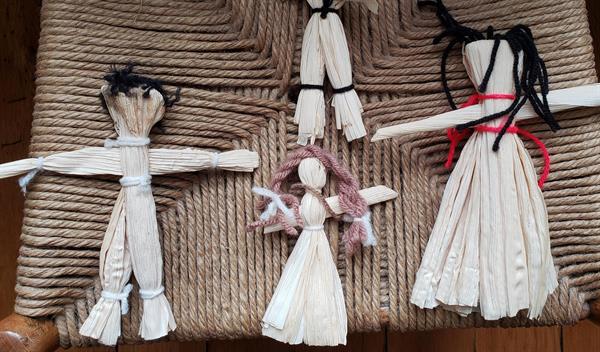 Use the Figures A-G Pictures Here and the directions below to make you own!

1) Choose 2 or 3 husks and lightly wet them with water.  Just enough to make them malleable for bending.
2) Shake off any excess water and lay the husks on top of each other, facing the same direction.
3)Tie them together tightly about 1 inch from the top. See Figure A. Flatten and cut the very top edges to round them off to make them the shape of a head.
4)Holding the head area, turn the figure upside down by pulling the longer ends of the husks, one at at time, firmly over the head. Tie the husks to make the neck. See Figure B.
5) Roll one additional husk, from the bottom, up into a straw shape to make the arms. Separate the husks on the body of your doll and place the arm piece under the neck. See Figure C.
6) Tie the arms in place with a string, either directly underneath or a criss-cross pattern over the chest and back. See Figure D.
7) To make the dolls shoulders, cut one large husk into two, 1 inch wide pieces. Cross them front to back at each side and tie around the waist. See Figure E.
8) To make a husk skirt - Place the large ends of 2-3 husks above the dolls head with the other ends just below the waist. Arrange them as evenly as possible around the doll. Tie them at the waist. See Figure F. Fold the husks sticking up above the head down over the waist.
9) To make husk pants - Gently separate the husks just below the waist into two sections, one for each leg. Tie each leg at the ankle.
10) Use string, yarn and fabric to add hair and clothing to your doll.